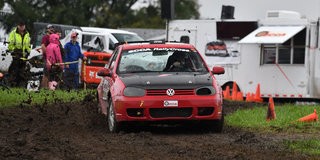 TOPEKA, Kan. (Sept. 22, 2019) -- The 2019 DirtFish SCCA® RallyCross National Championship is officially in the books. The word for the weekend was traction. Courses started off on grass with minimal footing and quickly turned to gummy, grippy dirt that became super slick mud, leaving competitors creatively trying to find fresh grass for a toehold once the rains set in. Those who competed at the National Balloon Classic Memorial Balloon Field in years past came prepared with mud tires in tow, while some first timers scrambled for traction solutions.

Saturday morning runs started off dry and tacky, making for some great competition and quick times on competitors’ three runs. The rains came in shortly after the start of run group three, turning the clutching dirt into a layer of slick mud with hard-packed clay beneath. Stock class cars with their tire limitations were having difficulties maintaining momentum, whereas Prepared and Modified classes with better tire options were able to maintain some speed, although times certainly got a bit slower. In the afternoon the heavy rain stayed away with only occasional light sprinkles, making the fresh course a blast for many competitors. The wide-open, sweeping corners and speeds even required some drivers to grab third gear. Saturday afternoon runs made up for the slick morning conditions, though competitors only got two afternoon passes on the course since the morning session ran long as a result of deteriorating conditions.

Rains all night Saturday and into Sunday morning left questions about track conditions on the second day. But when it was offered to “call” the event at the morning drivers’ meeting, the undaunted RallyCross community responded with an overwhelming cheer to keep on going!  This turned out to be a great move as determined drivers started on a fresh, third course Sunday which proved to be a thrilling endeavor. Course designers did an amazing job using conditions to their advantage by including broad, sweeping corners that linked amazingly well with the slick conditions. The rain had paused at the beginning of run group one, but light sprinkles returned in the middle of run group two, slowing times slightly. Sprinkles continued through run groups two and part of three, but then subsided -- leaving the course muddy but consistent throughout the fourth and final run group.

Mark Hill was a crowd favorite in his Mitsubishi “E-Voh.” He made the slick courses look like child’s play with his mud tires and extensive racing background. Hill ran away with the Prepared All-Wheel Drive Championship, leaving Mark Macoubrie -- who also made some very impressive runs -- over 20 seconds behind for second place in his Subaru WRX STI. Riley McDowell was only 2.906 seconds behind Macoubrie in another Subaru WRX STI. McDowell got a 10-second missed gate penalty on his third run that ultimately landed him in third place.

Bret Hunter wasted no time showing he meant business in his Honda CRX, laying down some very fast times and taking the lead over Andy Thomas in his Toyota Celica. Hunter added a second or two to his lead each run on Saturday. Michael Gallant, in a Volkswagen GTI, was lurking in the shadows just behind Thomas throughout the day Saturday. However, everything changed Sunday when the Modified Front-Wheel Drive class, which lucked out with decent course conditions, got its first real taste of the mud. This became a race all about the tires. Gallant came out swinging, besting Hunter by over six seconds on his first run. Thomas got out of shape and hit a cone, dropping him back to sixth place and allowing Chris Zanis, co-driving with Gallant, to slide into third place. On the second and final run Sunday, Gallant bested Hunter by nearly four-and-a-half seconds, thus stealing the championship by a mere .458 seconds!

Brianne Corn came out Sunday morning with her sights set on the best time of the day with the most unlikely drivetrain and conditions to do it in. Her Modified Rear-Wheel Drive Mazda Miata, nicknamed General Wee, was all business. Corn put on an extremely impressive show, throwing some massive rooster tails and beautifully handling her highly modified Miata through the slick course, which put 10 seconds on the car’s owner and dual driver, Peter Dozeman. Doug Leibman, in his Volkswagon Super Beetle, started off giving Corn a run for her money and besting Dozeman Saturday morning. But after the rains came, Leibman’s time started slipping as traction went away once again, showing just how critical tire choice can be. Leibman’s times continued to deteriorate, coupled with a cone penalty, pushing him back to fourth place and leading the way for Vaugh Micciche to swoop in for the third-place spot in his Porsche 924 S.

The weekend was a mix of weather conditions that made competition challenging, particularly for those in Stock classes. But this also made for some fun, exciting courses and an excellent weekend of competition which brought out the very best in RallyCross comradery among competitors.

As SCCA’s most widespread and readily accessible form of extreme motorsport, RallyCross is a scaled-down version of a rally stage laid out on a non-paved plot of land where the course is delineated by traffic cones instead of trees or rocks. Participation requirements are considerably less than those associated with other forms of performance rally, so drivers usually only need a mechanically sound, hardtop vehicle and a helmet to come play in the dirt.

The Sports Car Club of America®, Inc., founded in 1944, is a 67,500-member motorsports organization that incorporates all facets of autocross, rally and road racing at both Club and professional levels. With headquarters in Topeka, Kansas, the SCCA annually sanctions over 2,000 events through its 116 Regions and subsidiary divisions. Much of the SCCA’s activities are made possible with support from the following Official Partners: Hagerty, the Official Insurance Partner of SCCA; Hawk Performance, the Official Brake Products of SCCA; Sunoco, the Official Fuel of SCCA; and Tire Rack, the Official Tire Retailer of SCCA. To learn more, please visit www.scca.com.