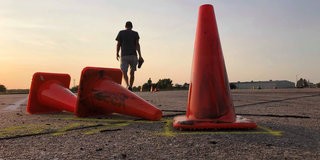 A Mix of Old and New -- Each year at the Tire Rack Solo Nationals there are plenty of familiar faces and competition vehicles. That’s partly due to the fact that the event, now in its 47th year, is simply so electric and so much fun. But there are also a batch of Solo Nats newbies each year that come to Lincoln, Nebraska, to experience the excitement for themselves after reading and hearing about this SCCA Championship event for years.

Tane Hopu, 53, of SCCA’s Central Florida Region, is one such newbie at the 2019 Tire Rack Solo Nationals. He has always had an interest in motorsports, but thought getting involved would cost too much money because you have to buy an expensive car, install a roll bar, purchase safety equipment, etc. … . However, a couple years ago he had the chance to drive his mother’s Mazda and thought to himself, “Oh my gosh, this Miata drives really nice!”

So, Hopu went out and got himself an inexpensive, older Miata; signed up for a Tire Rack SCCA Starting Line School, and has now been an SCCA member for five years who actively participates in upwards of 10 autocrosses each year.

“Autocross is the best activity, price-point wise, to get into the action and get that motorsports feel,” Hopu believes. “The Starting Line School was a great value and really fun. It made me really comfortable at my first autocross.”

Hopu decided this year to give himself a challenge and make the trek to Lincoln for his first-ever Tire Rack Solo Nationals Championship appearance. “I felt I was at that point that I need to be exposed to the top guys just to see what they’re doing with their engines, configurations they’re using, and just say ‘hi.’” Hopu said. “So, I bit the bullet and decided this year to go with my under-prepped, C Street Prepared car and just experience the event.”

Like so many first timers who arrive at the Solo Nats site, Hopu was immediately taken aback by the immensity of the gathering. Just row after row of cars, campers and tow vehicles; and some of the best autocross drivers he has heard about over the past couple years.

“It’s amazing,” Hopu admitted. “This location is bigger than anything I’ve ever seen. And the paddock is crazy. I’ve been spending my off hours just walking around looking at the variety of cars and support trailers. I’m kind of blown away.”

If you’re an autocrosser, put on your ‘bucket list’ a trip to Lincoln to participate in a Tire Rack Solo Nationals Championship. And if you’re a fan of motorsports who has no clue how to get involved, take a tip from Hopu and check out an SCCA autocross near you. It may open a whole new world of fun and friendships you never thought possible.

A Beautiful Week in Lincoln -- The Lincoln weather is known to be unpredictable and that often influences competition. A class can be won or lost based on if or when it begins to rain. It doesn't happen often, but this year's Solo Nationals has only been influenced by temperature. A brief thunderstorm caused a lightning delay on Tuesday, but ultimately didn’t drop enough rain on the courses to hinder surface conditions once competition resumed. Even the temperatures have been consistent as both sets of competitors saw more heat on day one, but cooler temperatures on their second days. All in all, a beautiful, clear week in lovely Lincoln, Nebraska.